Ferrari 612 Scaglietti is a super-fast supercar with all the power and roadholding you'd expect from Maranello. It is built around Ferrari's latest V-12 engine, which has a displacement of 5.75 litres. Enough to give 540 bhp, which can push the 2+2 along at over 195 mph. It sprints to 60 mph in about 4.2 seconds. So, this is a real performer in the Ferrari tradition a supercar verging on the fantasy car world.

Truth to tell, this is not the most beautiful Ferrari ever. Impressive, yes, but some of the lines, particularly at the front, don't work too well. One of the things that the Pininfarina stylists couldn't get right was the headlamps. Maybe it's because you make headlamps so many different shapes these days that they give some stylists problems. On the Scaglietti they make the front end look a bit pinched.

Another strange detail is the scalloped side panels, which Ferrari says reflects the lines of the 375 MM built for Rossellini as a gift for Ingrid Bergman. It is also reminiscent of an early Chevrolet Corvette, which is not so flattering. While we're going back to the past, the name is also a flash-back; Sergio Scaglietti was a Modenese stylist and coach builder who excelled in sculpting aluminum bodies for Ferrari and others in the 50s and 60s.

The 612 Scaglietti is certainly a very impressive looking car, especially in blood red. And it is a genuine 2+2. There aren't many that can get this close to 200 mph.

Both the technology and the layout are what make the 612 Scaglietti. Ferrari has pushed the engine back as far it can, so that it is behind the front wheels. They call this mid-front layout. To me, this is a front-engine layout, but with the engine in the proper place for this type of car.

Many engineers reckon that 50:50 is the optimum for a front-engine car, but with the 612 Scaglietti, Ferrari has gone further. It has mounted the gearbox at the rear. Then, many of the minor components have been moved back a bit as well, so the front:rear weight distribution is about 46:54, which will help provide bags of traction, and should help enterprising drivers produce nice tail slides.

This layout, with the big V-12 well back, and the gearbox at the rear, is combined with an all-aluminum body. Not only is there an aluminum space frame, but all the external panels are aluminum as well. This is a lightweight construction with a high but not huge cost unlike carbon fiber composites which are very, very expensive.

Body made of aluminum castings, extrusions, and panels

As on the 360 Modena, the frame consists of some aluminum castings, which are joined together by extruded members basically tubular, but with complex cross-sections by welding. The construction is not exactly like that on the 360 Modena, as it benefits from that experience. In addition to the castings at the joints, there are also large castings at the front and rear to carry the suspension.

The structural aluminum panels are riveted in position, and the other aluminum panels added. An excellent method, which results in the car being 60 kg lighter than the smaller 456 GT. Good news!

Sitting in this frame is the latest version of Ferrari's 65 deg V-12 engine not the 60 deg angle between the banks of cylinders that convention suggests is correct. Ferrari always went its own way in that respect, and no one is changing that now!

This is in all respects, a classic Ferrari engine, with four valves per cylinder and the latest in engine management. Under the hood, you get crackled red paint on the intake manifolds this is the sort of detail Ferrari loves.

The engine has been improved over earlier units in a number of ways. The compression ratio has been increased to 11.2:1, and both the intake and exhaust systems have improved flow, which means more power. There is a dry sump system with its own oil cooler to prevent oil surge on corners.

To transmit the 540 bhp, Ferrari uses a six-speed gearbox, in unit with the axle gears in a transaxle. There are the usual alternatives of a manual or a sequential box, which is controlled by paddles. This box has both normal and sport mode, and the sport mode really brings out the Ferrari flavor to the fullest. It evidently works well, changing gear very quickly.

To let you put plenty of power through the wheels even on slippery surfaces, a limited slip differential is fitted. Traction and handling also benefit from the fact that there are fat 285/40 ZR19 Pirelli P Zero Rosso tires on 10 inch rims at the rear, against 245/45 ZR18 on 8 inch rims at the front.

The suspension is typical Ferrari, with double wishbones and coil springs front and rear, but moves a step forward with adaptive damping the damper setting are changed automatically according to the speed and road surface. The wishbones are forged aluminum.

Ferrari has installed large Brembo brakes with ABS, of course, and also new to the 612 Scaglietti is Ferrari's vehicle stability control, which they call CST. it can be de-activated.

Overall. a welcome addition to the thin ranks of fast but sporty 2+2 supercars, but very expensive, as you'd expect from a car that challenges 200 mph.

Popular posts from this blog 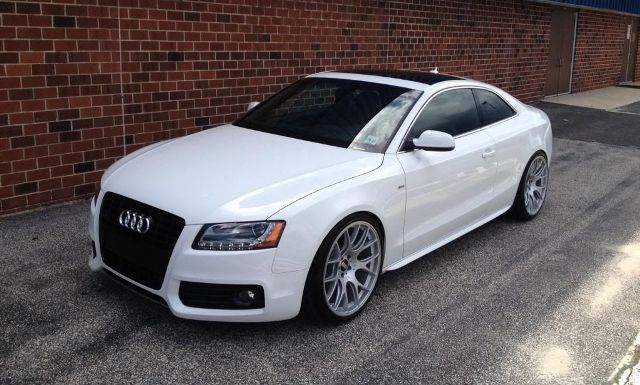 A completely new model, the Audi S5 is the top of the 5 Series, which is filled out with the A5 models. All look very similar, and provide good performance in a neat package. Stiff competition for the BMW 3 series coupe, but can it compete with the BMW 650i, Jaguar XK or Mercedes-Benz CLK 63 AMG? Possibly. In any event, the Audi S5 is a sleek looking coupe, with a front end reminiscent of the R8, and a semi-fastback roof line, and just discernible swept lines up and over the front and rear wheels. It is a smart looking car, and one that will blend in well at the country club. Like almost all Audi designs, the S5 and A5 are smart, balanced designs with some neat features, but there is nothing shocking, nothing very exciting about the shape. But what about performance? Well, Audi has picked its V-8 to give enough power to see off many competitors, although this is not the most powerful version of this superb engine. For the S5 it is rated at 354 bhp at 7,000 rpm, with 325 lb ft (440 Nm)
Read more 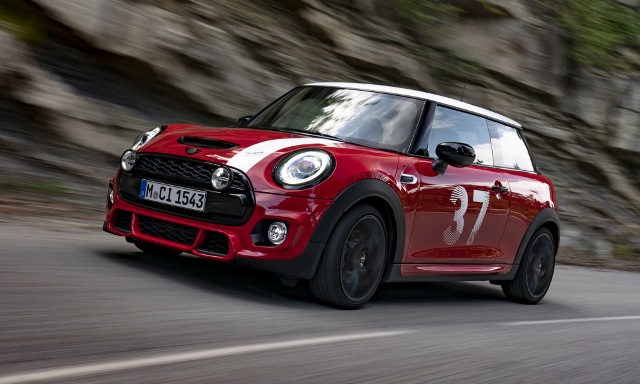 It could be a love-hate relationship with the MINI Cooper S hot hatch. You’ll love the responsive and gutsy engine, with masses of power from 4,000 upward. But you’ll groan when you decide to overtake with 2,500-3,000 rpm on the clock. You’ll love the handling, but you won’t like the ride it makes almost any sports car seem supple! Funky interior You get a great big and ugly speedo in the middle of the car the original looked a lot better and a rev-counter in front of you. The layout is OK, just the choice of design that we can live without. The minor switches are all chrome plated too. Still, these are minor grouses. The seating position is just fine, and the seat gives pretty good lateral support. It’s not so brilliant on a long journey, but on the whole does the job. With a large 1.6 litre engine in a small car you expect lively performance and you get it especially in the Cooper S, which has a supercharged 170 bhp engine. Supercharging usually gives you plenty of power at all speed
Read more